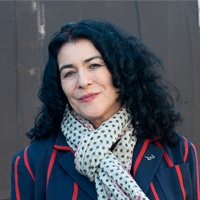 Janette Beckman is a British-born photographer who lives and works in New York. She began her career at the dawn of punk rock, working for music magazines such as The Face and Melody Maker. She shot artists from the Clash to Boy George, as well as three album covers for the Police. After moving to New York City in 1983, she was drawn to the underground hip-hop scene and photographed pioneers of the emerging genre, such as Run-DMC, Slick Rick, Salt-N-Pepa, Grandmaster Flash, and LL Cool J.

Her work has been shown in galleries worldwide and is in the permanent collections of the Smithsonian National Museum of African American History and Culture, the Museum of the City of New York, and the Musée des Civilisations de l’Europe. Beckman continues to chronicle new subcultures and shoots for fashion brands such as Levi’s and Dior. She is represented by the Fahey/Klein Gallery